Imagine Green Day met up with Buddy Holly and had a jam, and you’ll be on the same lines as Rich Chambers. Residing in an ambitious indie-rock attire with elements of garage rock thrown in for extra flavor, “High School Can’t Last Forever” is bathed with a timeless soundscape that feels up to the times yet nostalgic over yesteryear.

Sharing his thoughts on the release, Rich Chambers explains: “High school often seems to represent that moment in our lives where anything is possible. It is our launching pad to life, so to speak. From that point, we all start to make decisions (or don’t make decisions) that ultimately start each of us off down our own unique life path. “High School Can’t Last Forever” is a song that tackles this defining moment in our lives.

“It begs the notion that those who follow dreams or take chances to go after something often live without regret, whereas, those who are never willing to take a chance or squash their dreams (for whatever reason) often live with regret and find themselves looking back to life’s launching pad (high school), wishing they could launch again. It does this to the backbeat of an under three minute, timeless, rock ‘n’ roll soundtrack.”

The high energy, 60’s oozing artist, Rich Chambers, brings in the surf-rock tide with new single, Summer Looks So Good On You.

Canadian artist, Rich Chambers swizzles in the heat from his latest single, Summer Looks So Good On You.

The track flows as a wave of optimism, bursting with colour, nostalgic 60’s riffs, and a goldenly catchy tune.

Chambers uses his recent release as a flag-post for a season of glistening tunes and light-heartedness. Sizzling in his retro sound, Chambers style brings 60’s surf-rock into the modern era, something we need now more than ever.

Being no stranger to electric tunes, Chambers has been writing and performing music that ripples of the same golden energy.

As soon as the track hits the sound waves, we are pulled into the sonic soundscape of a beach, effortless and vibrant – similar to the likings of The Beach Boys.

“Summer Looks So Good On You’ is a feel-good song that celebrates the proverbial promises of love, hope and happiness that a beautiful summer day often seems to provide us!” Chambers’ explains.

The track came about whilst Chambers was driving home during a heatwave. In the midst of the traffic and humidity, the artists became transcended to the wide Californian coastal roads, his imagination fuelled by Lisa Loeb’s track, Summer.

After his sudden burst of gumption, Chambers rushed home and wrote the entire song in 30 minutes; “this is not the norm for me as most of my songs take a  lot longer, but when I am as inspired as I was that day, the song kind of came out”.

Summer Looks So Good On You is a vibrantly magnetic tune, layered in an electric guitar riff and retro harmonies. Chambers’ work deserves to be shared for it’s imaginative, time-travelling drift to a warmer time.

A Song So Many Of Us Have Lived From Rich Chambers

Chambers follows up the success of the “socially charged rocker” ‘I’m So Tired’ with ‘Sorry Isn’t Good Enough’, a track steeped in influences from Rock, Country, Dylan, troubadour-esque Folk  and Adult Contemporary sensibilities reminiscent of Tom Petty or Springsteen.

In discussing the song Chambers writes “I really wanted to tap into that extreme remorse that comes with a love…sabotaged because of our own actions”. It’s very interesting that Chambers should pick such a universal subject matter but what is more interesting is his decision to try to tackle in a way that is both convention, trope and genre breaking as he decided to immerse an ambiguous story, within the lyrical content, as a sort of ‘fill in the blanks’ for the listener to lay their own interpretation upon the catchy, relatable, genre crossing melodies and musical arrangements.

Rich Chambers is yet another example of the vast swathes of independent talent emerging amongst the new, undiscovered plains and promised lands that the age of information has wrought upon our societies, standing on the shoulders of five album releases. But if Chambers continues to release music like “Sorry Isn’t Good Enough”, he won’t remain independent for long.

Rich Chambers' socially conscious rocker, "I'm So Tired," has been gaining momentum on both the airwaves and the web. The single is breaking through on the US college radio circuit as well as making headway on independent radio throughout Europe and North America. It is also receiving stellar reviews on music sites and blogs around the globe. The true strength of this three-minute rocker is its powerful use of a relatable, infectious melody and rhythm that hammers home a message of social unrest and fatigue. "On January 6th, 2021, I couldn't believe I was witnessing an angry mob storming Capitol Hill in Washington, DC," says Chambers. "I was appalled and found myself absolutely fed up and tired with all the social unrest I was seeing. I knew then and there that I had to say something." This was the genesis of "I'm So Tired," and its message, coupled with a riveting video, is resonating. Born and raised in Vancouver, Canada, Chambers picked up the guitar at age 10 and wrote his first song at the age of 14. With multiple influences that range from Buddy Holly, the Beatles, Johnny Cash, to Green Day, and countless others, Chambers has released five full albums and achieved significant success worldwide with his music, including his standout 2020 'Santa's Rockin' Band' Christmas album. His latest single "I'm So Tired" (and its accompanying video) is an intelligently compelling commentary of today's social unrest. Who says Rock n' Roll can't be meaningful? Rich Chambers certainly doesn't!

This was just posted in a Portuguese-language blog on March 9, 2021. It tells me my music is starting to make its way around the globe, which is very exciting!! 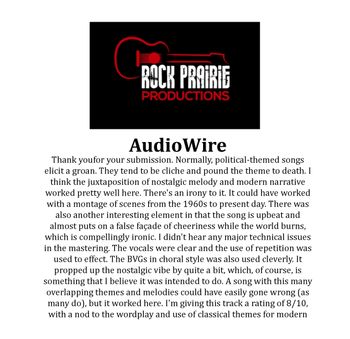 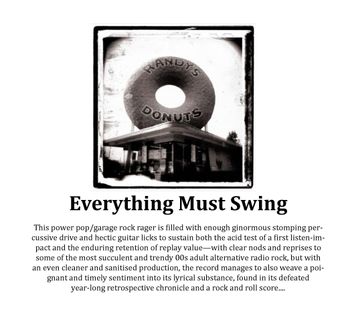 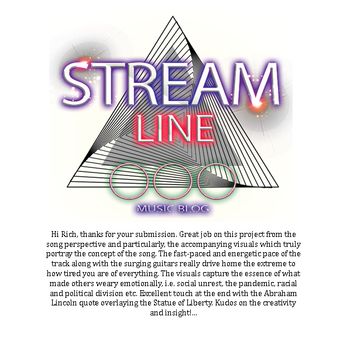 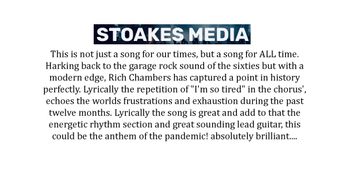 After this past year of pure insanity, we think Rich Chambers’ latest rocking track sums it up best, “I’m So Tired”. Do yourselves a favor and read along with us as we break down our thoughts on the song, in addition to a background on the artist as well.

Following the Capital Hill Riots on January 6th of this year, Rich Chambers decided enough was enough and made the decision to create this overly relatable track, “I’m So Tired”. Taking influences from some of the greats such as Buddy Holly, The Beatles, Green Day, and more, Chambers has added his own bits of signature sound within the mix, and the end result was fantastic.

Following up his successful Christmas album, Santa’s Rockin Band, the release of this latest single actually came a bit earlier than expected. Considering the situations we find ourselves in though, Chambers felt the urge to release it after just writing and recording it days prior. A music video followed it to help amplify the message, and the rest was history. We’re thankful he did because sometimes talking about it doesn’t help, but a powerful statement song can really get the point across.

At just three total minutes in runtime, we’re confident that the point he’s trying to make will come across quite nicely. While he could’ve gone another route and delivered a 10+ minute ballad detailing each moment from the day, we feel that a short and succinct track like this that is very much in your face was the right choice for the overall tone.

In sound, it absolutely slays within its instrumentation and impressiveness. Having listened to Santa’s Rockin Band, directly after our multiple run throughs of “I’m So Tired”, it became clear fairly quickly that Chambers is a man of many talents. Taking away the context of the song for just a moment and treating it as an instrumental, it’s just as impressive. It features all the elements of what we like in our class rock sounding music, includes his commanding vocals, and ultimately gets the point across within its rugged sound.

Truly, there isn’t really too much else to say at this point, minus the fact that we highly urge and recommend you to give not only this single a listen, but the rest of his work a spin as well. It takes serious amounts of triumph to try to boil down the atrocities happening in our world to a single song, however as mentioned we’re thrilled that the way this song was crafted seems to have been the best way to do so. Whatever you do though, turn it loud, and enjoy!

OUR FEATURED SINGLE, ‘I'M SO TIRED’ BY RICH CHAMBERS, IS OUT NOW AND AVAILABLE TO STREAM ON ALL MAJOR STREAMING PLATFORMS!

Rich Chambers is a well established artist who burst onto the streaming scene in 2019. The Vancouver born singer/songwriter has always had a natural affinity for music; picking up the guitar at the young age of ten writing his first song by age fourteen. Although he receives creative inspiration from a number of artists such as Buddy Holly, The Beatles, Johnny Cash, Dean Martin, and Green Day, Rich Chambers combines a variety of compositional elements to form his unique sound.

To date, Rich Chambers has one album and six singles/EPs in his Spotify discography. Some of his most popular tracks include the likes of ‘Snow Miser vs. Heat Miser’, amassing almost seven hundred and twenty-three thousand streams, ‘It’s Christmas Time (All Over the World)’, gathering over two hundred and sixty-four thousand streams, and ‘Peace and Harmony’, with over eighty-seven thousand streams. With more than sixteen thousand three hundred regular monthly listeners on Spotify alone, there is no denying the fact that Rich Chambers has developed a dedicated following of loyal fans.

Our featured single, ‘I'm So Tired’ by Rich Chambers, is out now and available to stream on all major streaming platforms! The single lasts around three minutes and sits at a steady 168bpm.

The track commences with a twelve second instrumental introduction that sets the tone for the proceeding verse. Rich Chambers’ vocal color is stylistic and emotive; seamlessly synchronising with the rhythmic flow of the instrumental accompaniment. The implementation of a harmonised backing vocal in the main hook adds a depth to the overall sound without detracting from the prominence of the main melody.

A number of instrumental sections, check out the guitar solo from 0:47 to 1:22, deliver just the right amount of dynamic diversity to ensure that this single is engaging from start to finish. By the time ‘I'm So Tired’ draws to a close, you’ll find yourself humming along with the memorable melody and in need of hitting that repeat button for another listen.

From the well balanced production and creative instrumentation, to the impressive vocal performance and authentic lyricism, fans of Rich Chambers, as well as those who appreciate new and creative music, will definitely want to hear this single. Make sure you follow Rich Chambers on social media to keep up to date with upcoming releases and performances!

I just had a whole pile of blogs post articles about me. Here are links to some of them:

“Rich I've just heard your album all the way through (this is unheard of- I always sample the songs then go back to those I reckon might fit the program format) It's the best album I've heard from a new act for ages (and you can quote me) Thanks for sending me such a great album Regards Jeff Bauer Radio Ltd, part of the Bauer Publishing Group, is home to a growing network of no.1 commercial radio stations in all major markets in the UK and the no.1 commercial broadcaster in national digital radio.” - Jeff Jones